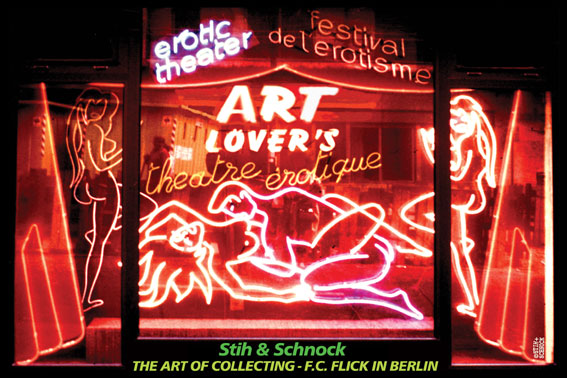 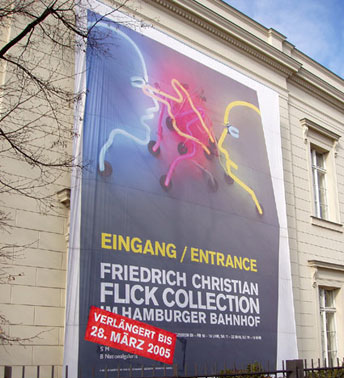 Prof. Renata Stih presenting the Flick-project during
the panel discussion "The Art of Collecting - Flick in Berlin"
at the Akademie der Künste, Berlin on September 25, 2004
(dt.Text siehe unten) 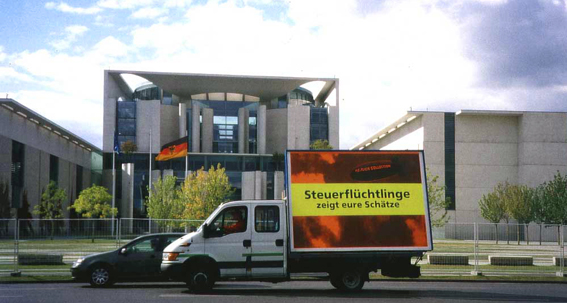 I am very grateful to the Akademie der Künste and the members of the fine arts department, whom we proposed this discussion; we are especially delighted that it will take place here today.
"The Art of Collecting - Flick in Berlin" is an art project that we started with a study group within the frame of the Neue Gesellschaft für Bildende Kunst (NGBK) in Berlin in spring of 2003. Thanks to the votes of the NGBK-members we were able to realize this project. 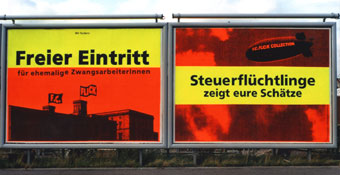 Perhaps you have seen the two posters in the immediate vicinity of the Hamburger Bahnhof. One of them looks like an upside-down German flag and is titled: "We demand: Free admission for former slave workers". On the other you can see a floating zeppelin with the inscription: "F.C. Flick Collection". The text is: "Tax evaders, show your treasures".
The mobile version drove through the city all week long and is standing in front of the Akademie der Künste this evening.
We published a booklet on the project together with the NGBK. The title is "The Art of Collecting" and it deals, roughly speaking, with the eroticism of money (ISBN 3-926796-91-X). We chose for the cover a motif from the red light district that makes an unmistakable reference to Bruce Nauman, whose works were purchased in large numbers by Friedrich Christian Flick. The title of the picture is "Art Lovers - Flick in Berlin".
Of course, we were especially delighted that the State Museums made a Bruce Nauman work the leitmotif of the opening exhibition.
What is revealing is the incorrect translation by Friedrich Christian Flick of Nauman's title, "Poke in the Eye", on the invitation card: he calls it "Faust aufs Auge" [literally: fist in the eye - a German idiom for: like chalk and cheese].
But what is the finger supposed to point at here? Is it really about art opening one's eyes - in the sense of Paul Klee? Mick Flick proved that the innocent belief that art substantially contributes to educating enlightened, better people is nothing but a pious hope. All that counts is that the show must go on - whatever the cost.
Everyone can see that Mr. Flick was able to buy a lot of art with a lot of money in a very short period of time. For this reason, when walking through this show filled to the brim, one is reminded more of an art fair or a display stockroom than of a museum.
Buying and possessing is obviously given top priority. It's all about piling up capital, like with Scrooge McDuck in Duckburg, and not about the in-depth examination of artistic careers and contents.
Mr. Flick says he stands in front of the art to protect it from harm. But who protects the art from Mr. Flick, when he makes art an instrument to add a brighter side to his gloomy family history?
The size and mass of the Collection are incessantly mentioned as features of quality, although it was built up intensively only starting in 1996. And by extending the basement rooms it even surpassed the documenta in Kassel by a few square meters! The raving comments on the length of the Rieck Halls are reminiscent of games of pubescent boys fiddling around with a measuring tape.
Indeed, it fits together like chalk and cheese, when the Chancellor Schröder demands that tax evaders be ostracized, while on the other hand heartily congratulating the tax-saving Swiss-by-choice Friedrich Christian Flick at the exhibition opening of the seven-year loan by his mailbox company and ennobling him through an invitation to the Chancellor's office.
Yes, you heard correctly. The Collection is named after Friedrich Christian Flick; it doesn't belong to him, however, but to a mailbox company on the island of Guernsey, a so-called tax haven in the English Channel - and the collection is now hanging in a public museum.
Friedrich Christian Flick, the collector and businessman, can be glad that he doesn't have to build and maintain a museum of his own now, as was planned in Zurich. In Berlin, the maintenance of the collection, consuming approx. 7 million euros in 7 years, will be financed by the taxpayers of a bankrupt city.
After seven years of good behavior, one will then see how things proceed; no gifts were made on the occasion of the opening.
With the Flicks, everything is done so that even smaller investments like this art hall pay off. In her article "La Methóde Flick", Marianne Theil sheds light on the activities of grandfather, uncle and grandson, where the cultivation of the political landscape is passed on from generation to generation. 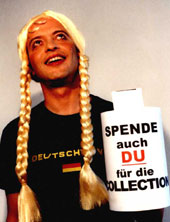 Just one day after the opening, a panel discussion was held at the Hamburger Bahnhof, which created more of a smoke-screen than anything else. The director of the Kunsthaus Zurich seriously and without being challenged stated that the discussion revolving around the Flick Collection "was brought into Switzerland from outside." If he referred to the appeal signed by 27 persons from the field of culture, among them Günter Grass, Peter Härtling, Sasha Waltz, Jürgen Flimm, Frank Castorf, Christoph Martaler, Ulrich Erben, Siegfried Lenz and Volker Schlöndorff, from June, 2001, he was certainly unfamiliar with the resolution that Zurich's town council passed in March, 2001.
I quote: "In an official statement, the town council made it clear that in regard to the compensation fund, it would have come to a different decision. Apart from that, the city president, in a personal conversation with Friedrich Christian Flick, pointed out that large parts of the Zurich population would welcome the participation of the Flick family in the compensation fund of the German industry. This would be a visible sign that Friedrich Christian Flick takes into account the historical responsibility of the Flick family." (end of quote)
Even though it was about establishing a private museum, the inhabitants of Zurich attached to it the demand for compensating the slave workers.
In January, 2003, the director of the Berlin State Museums then announced the coup made with Friedrich Christian Flick: "We have spoken with all important people of the city. The alliance is forged." One was faced with a fait accompli, the contract was signed, discussions were not desired. A wall was built to fend off criticism.
One building stone of this wall is the artificial marathon discussion between Eugen Blume and Friedrich Christian Flick in the newspaper distributed to all visitors of the Hamburger Bahnhof Museum. With its all inclusive vastness, it reminds one of the work of an array of law firms having to draw up a consistent final speech.
If you would like to read an authentic interview with Friedrich Christian Flick, we recommend the one in the Neue Züricher Zeitung from April 27, 2003, which is naturally reprinted in our publication, "The Art of Collecting". In it, Friedrich Christian Flick makes it clear that he sees no reason to give money to former forced laborers, since some former Flick companies paid disproportionate amounts into the compensation fund. Indeed, Hungarian forced laborers, who on Monday were the guests of the Fritz Bauer Institute in Berlin, each received a compensation amounting to 2000 marks from the Deutsche Bank, after it had acquired the Flick consortium.
Instead of making compensation payments, Friedrich Christian Flick established a foundation against racism and xenophobia in Potsdam.
"Wouldn't the last surviving slave laborers have deserved the money more than radical right-wing youths in Brandenburg?", Peter Richter raised this question in the Frankfurter Allgemeine Sonntagszeitung.
In his article, "Die Säuberung der Vergangenheit (The Purging of the Past)", the former director of the Jewish Museum in Berlin, Tom Freudenheim, describes the origin of the Frick Collection residing in a plush mansion on 5th Avenue in New York and states: "When we view a work of art, the former owner rarely plays a role in our aesthetic perception, but the collector is always present in the background. Such collectors and their collections convey the impression of an elegant masquerade - an attempt to raise oneself above the profane, lowly spheres of everyday life. Perhaps it is time for art museums to adopt a new trademark taken from the iconography of the Western world: the image of Pilate washing his hands in innocence."
From the towers of the Hamburger Bahnhof the inscription "F*C* Flick" is now unfortunately not fluttering in the wind, like on one of our posters. Instead, one reads the word "Raststätte (Service Area)". Of course we hope that the museum of Friedrich Christian Flick won't be used as such: to take a quick pee, fill up gas, eat a snack, and then drive on.

Thank you very much.

P.S.:
We have brought along for you copies of three important articles that are really worth reading:
by Hildegard Hamm-Brücher, by Peter Richter: "Immoral. Boring. Superfluous." and "Flick Connection" by Robin Alexander. 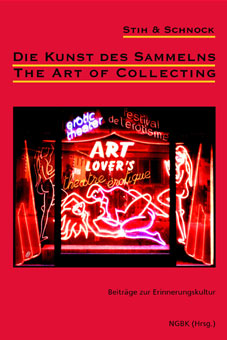 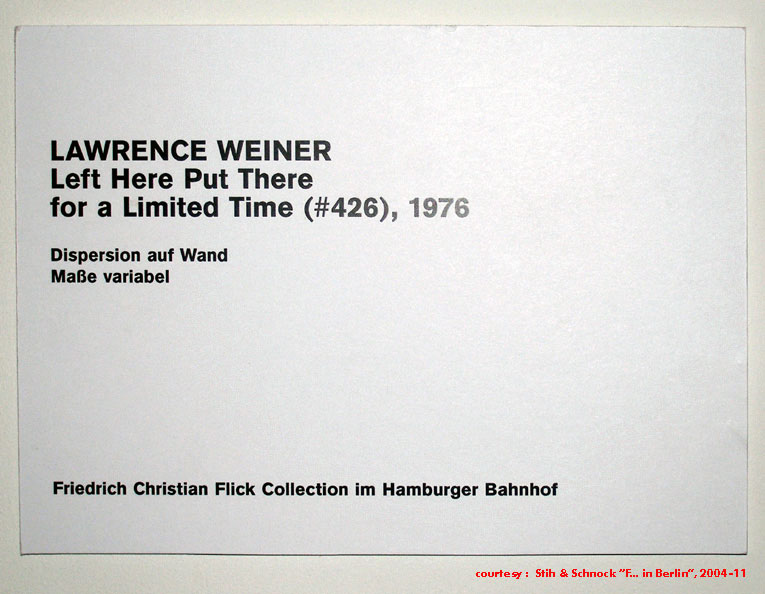